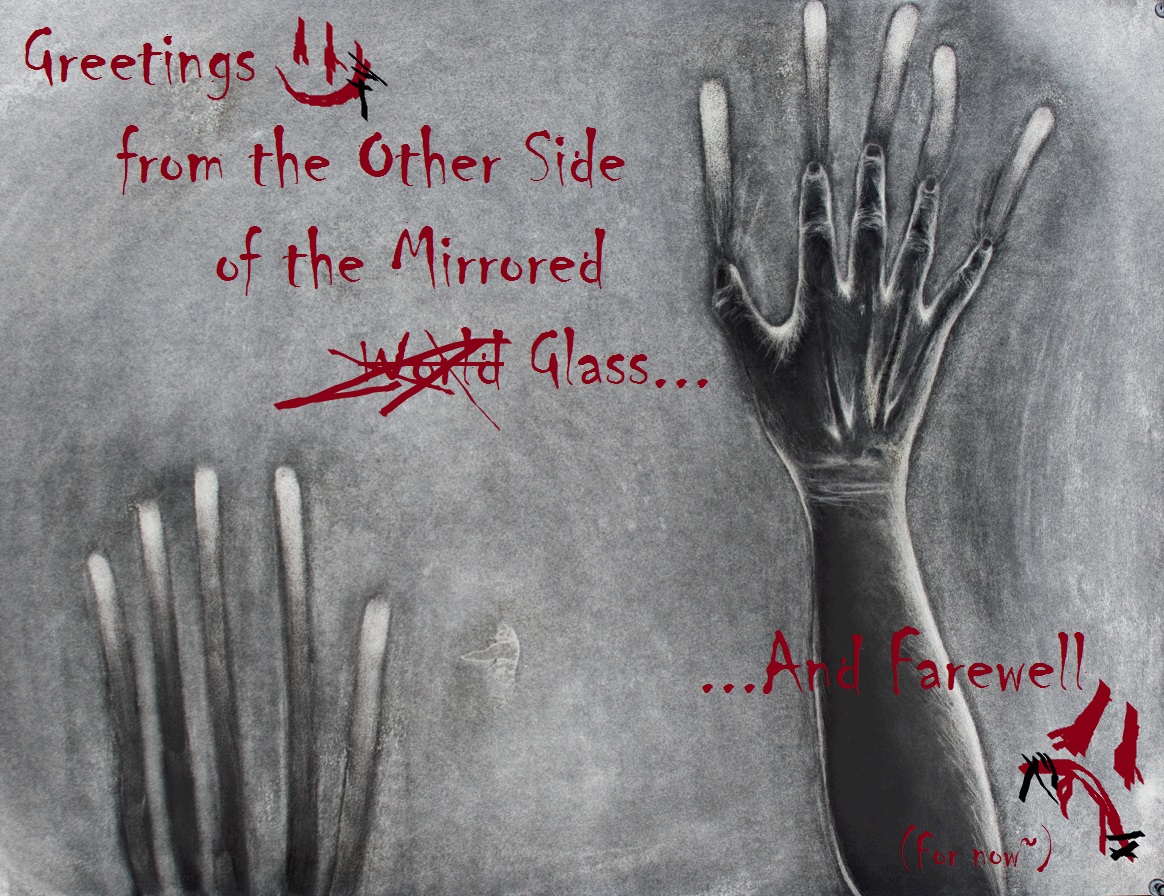 The Other Side, like your snuggly-snug shadows, methinks, is not as empty as it appears, aye? In fact, the seemingly hollow, swallowing spaces are teem- teeming with tales, tepid at first but ready to squeal, wail–scream like a tea kettle if given the time.

Stories reside–resound –in the Other Side. If you let them. Give them the chance to speak to you, through you. They can be as cozy as those shadows you so admire, the word-weaving as delicate and as carefully refined as that to which you are so bore-boringly accustomed. Different magick is not necessarily all trick and no treat. No, it’s just done different, aye?

Spells this Side of the screen can be simple-so-delightful word-weaving or they can be echoes ric-ricocheting in the unvoid, bouncing off others, creating a cacophony that is at once both disconcertingly discordant and hallowy harmonious. A steady stream of staccato, tweet-tweet-twitters in your unears, inviting you to join.

So much of this place is for collaboration, for complex hexcraft no one alchemist (nor new-necromancer *hmph*) can hope to weave entirely themselves. Different magick requires different skills & work, aye? In the dark, though, we find each other, run our rickety, unfingers over the wefts, warps, and webs of our story-skins. Share and shift and make room for more–the tales of our twinings.

Some things, I’m sure you know, Shadow Girl, fit better than others. Methinks spinning snippets of word-weaving on the World Wide Web for others to, mayhaps, stumble across and elaborate upon/complicate easier for you to appreciate than coming up with oily, snake-slithery words for ha-ha funnies. Our tastes, I believe, align in such a way. Curses and ha-ha hexes that create inconvenience–fly-away strands that won’t keep to their bands, slippery shoe laces, tongue-twist-twist-twisting–are great sport  but, words woven to summon tears or demand blood are decidedly less fun to play with 🙁 The only flesh, blood, and bone a spell should require is your own, the only tears a poem need those freely, hum-humbly offered. If your funny ha-ha-ness is asking for otherwise, for more than fair, it’s not very funny ha-ha, huh?

….Here I am rambling to-and-fro like you, Dycpgc-Egpj-uyllyzc. Le sigh. Methinks you’ve grown as much on me as I’ve on you. Certainly, I’ve learned much about your Something World magick….it’s something, alright. . No shadow suspended on a string of dust. Your magick is grounded in, well, ground. Fleshed out from flesh. Very tangible. Kinesthetic. Ours is still far removed. At a–shortening–distance but, a distance nonetheless. In the absence of that solid sense your Something World specializes so wholly in, I think we’ve weathered well though. Gotten creative. Imaginative. Appreciative. Done well teaching appreciation for what is instead of what isn’t. But, you tell me? Though you cannot touch me, run your fingers over my story-skin as you are accustomed to in Somethingness, can you feel me? As much as you can hear me? Am I enough for you? Does my heart-for-handless-hands beat a rhythm you can jive to/with?

Methinks finding such an elusive, fair-for-sure jive a small but so necessary step. Unearthing a taste, too, for off-beat, Other delights also a must if one is to take something from my-handless-held-heart to their wickedly-warm-woosh-wooshing-one. Might unsettle the stomach or some other such sensitive system else-wise, aye?

Once you start bum-bum-bumbling like a honey bee rambling through the ruddy roses, it’s impossible to stop, huh? That, or you’re just contagious Shadow Girl…

Anyway, it’s been real  Shadow Girl. Dycpgc-Egpj-uyllyzc. Hope to hear–haha–from you and your shadows soon. Don’t be a stranger, now ^.^ None of you alchemists out there, should settle for being strangers. Drop a line in the dark and the ripples will reach my far reaches–make them near, you hear–ha–? Or, cast a tweet-tweet-twittering spell and I will be sure to  tweet-tweet-twitter back a spell at you. Though the Other Side may be a vast and untamed unvoid, words to and from friends tend to travel the swiftest of any spells~